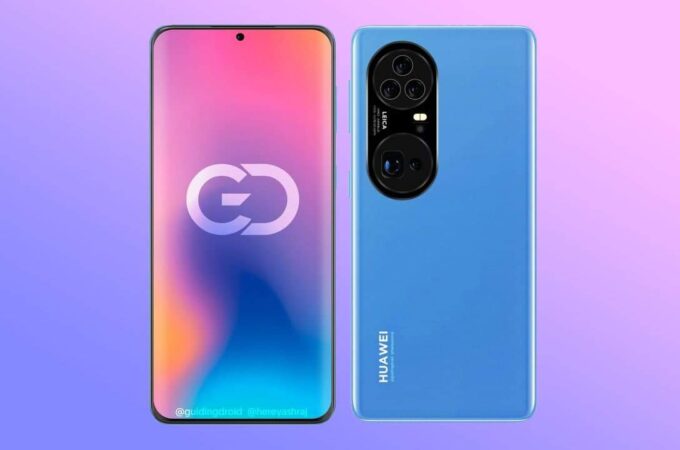 Huawei P50 and Huawei P50 Pro may have registered a few leaks till now, but we had yet to see the Huawei P50 Pro+ in clear details. Today that’s corrected as the device leaks in a set of images and features. Last I checked, the Huawei P50 series was coming in June 2021, by the way.

Huawei P50 Pro+ should push all the features of the P50 models to the next level, including beefing up the zoom. We may even get past 10X optical zoom, if possible. 120X digital zoom is already doable, as shown by the Mi 10 Ultra and Mi 11 Ultra from Xiaomi. As far as the new renders are concerned, we’re getting the same figure 8 shaped camera module, with Leica technology and 3 upper cameras, plus one gigantic lower shooter. That one may just be the brand new 1 inch 50 MP camera sensor from Sony.

There’s a single punch hole upfront for a selfie camera, meaning there’s no more IR face unlock, which is a bummer. The screen is curved on the sides and I’m hearing that we’re finally getting stereo speakers, in lieu of the piezoelectric one embedded in the screen for calls. The new 1 inch sensor from Sony is dubbed IMX800 and the source even mentions 200X zoom at some point. Huawei P50 Pro+ is expected to also bring a 6.7 inch OLED screen with 120 Hz refresh rate, a 4800 mAh battery and a Kirin 9000 CPU.

16 GB of RAM and 512 GB of storage are also here and HarmonyOS 2.0 as the OS of choice. Insiders are also mentioning the date of June 17th for the debut press event.

About Kelvin
Passionate about design, especially smartphones, gadgets and tablets. Blogging on this site since 2008 and discovering prototypes and trends before bigshot companies sometimes
The list of smartphones that can be used for writing long texts   Devices and Tips No Adventurer Should Ever Go Exploring Without