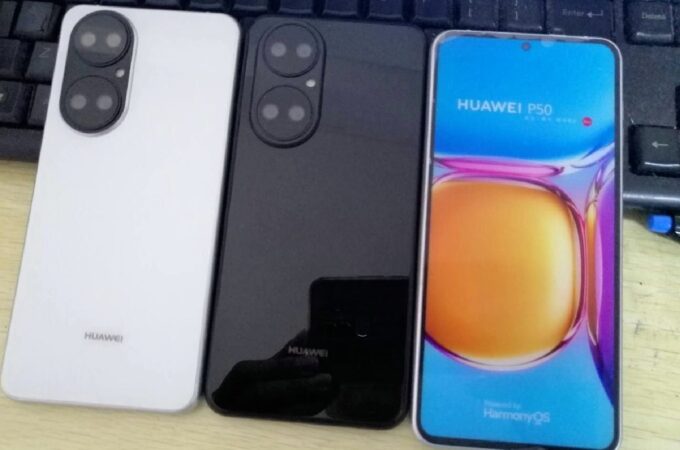 We’re getting closer and closer to the rumored debut time frame of the Huawei P50 series, which is May or June apparently. We’ve already seen renders of the phones, P50, P50 Pro and P50 Pro+ and now we also scored a set of photos for their dummy units. They come courtesy of Slashleaks and they’re shown below.

What we see here are Huawei P50 dummy units, with huge figured 8 shaped camera areas. The pill shaped punch hole is now gone, replaced by a singular punch hole at the top of the facade. This device supposedly has a 6.3 inch screen with a fingerprint scanner embedded into it. Slim bezels are also here and the large camera module at the back hosts 4 camera sensors. None of them looks like a periscope camera, though. We’ve heard we’re about to get a main camera, an ultrawide one, a telephoto one and probably a Macro one or a Time of Flight sensor.

HarmonyOS is also shown on the dummy’s “screen”, as the default installed OS in lieu of Android. This would definitely alienate Google’s partnership with Huawei. Back to more interesting thing, odds are that in June when the Huawei P50 series debuts, it’ll also inaugurate Sony’s new 50 megapixel IM707 sensor, which could measure 1 inch in size. The P50 body is also said to be larger than the P40’s and the refresh rate will be high, maybe even 120 Hz. A good piece of news is that Huawei got rid of the piezoelectric speaker and is now offering dual speakers for improved acoustics.

Would you buy this phone with HarmonyOS on board?

About Kelvin
Passionate about design, especially smartphones, gadgets and tablets. Blogging on this site since 2008 and discovering prototypes and trends before bigshot companies sometimes
BlackBerry Z3 Rendered With Projector Mounted Into Camera   Sony PlayStation 5G Concept is Pure GOLD