We already know that Apple is readying a tablet for those MacBook and iPhone fans, while Microsoft has already leaked its similar product, the Courier tablet. In case you’re worried about having to use a keyboard connected to the portable device in order to be able to write decently, worry not, as Microsoft has got it covered. 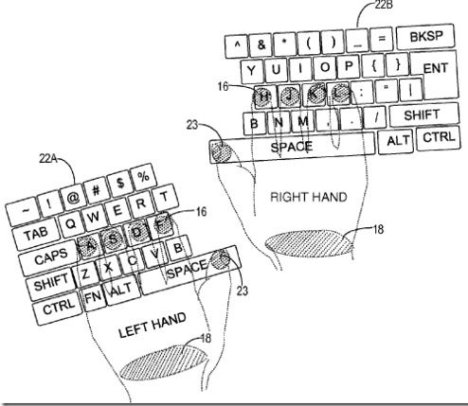 What you can see above is a Microsoft multitouch keyboard concept, allowing the user to write efficiently by tapping the display. The technology was recently filed as a patent by the Redmond giant and it turns out that the virtual keyboard will appear on screen whenever the user wants to write something, no matter where the hands are placed on the display.

This provides efficiency and huge user-friendliness, plus you won’t have to look at the screen, specially if the virtual keypad follows your hands. Strangely enough, there seems to be no letter “G” on the keyboard pictured above. Does Microsoft hate Google that much?

About Thrystan
Tabelit Gadget Concept, Ideal for People With Learning Disabilities   AFGT Gaming Device Mimics the Environment of the Virtual Universe You Play In