Straight from designer Gpat comes the Nokia Lumia X concept, a 5 inch phablet that has been rumored recently, under the name Juggernaut/Semaphore. This device looks pretty hot and it’s rare that we get to see a device with very slim upper and lower bezel. 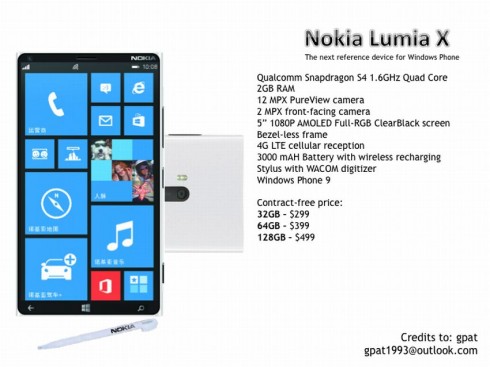 Nokia Lumia X features a quad core Qualcomm Snapdragon S4 1.6 GHz processor, 2 GB of RAM and at the back it keeps the classic Lumia design, but it hosts a 12 megapixel Pureview camera this time. Upfront it has a 2 megapixel front camera and also at the front there’s a 5 inch 1080p AMOLED Full RGB ClearBlack screen. The screen has a bezel-free frame and this device is capable of 4G LTE connectivity and it packs a 3000 mAh battery with wireless recharging supported.

Nokia Lumia X interacts with a Wacom digitizer stylus and is supposed to run Windows Phone 9. This makes this the first Windows Phone 9 concept we’ve seen ever and I can’t find much differences from WP8. There’s even a price listed here and frankly $299 is unrealistic for a contract free Nokia phablet, but one can dream, right?