Nokia Nexus Spark, Yet Another Nokia With Android and This Time With 41 Megapixel Camera

You all know Bob Freking for his great designs and now we’ve got yet another one, this time a Nokia Android phone dubbed Nexus Spark. This device features an appealing PureView camera and PureMotion HD display and you can see the new device pictured below. Bob wishes Nokia would switch to Android and the common opinion and request on our Facebook page is that Nokia needs Android. 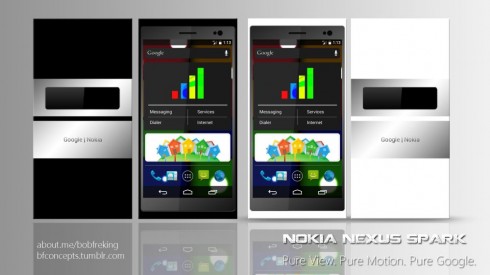 So, the Nokia Nexus Spark brings us a 41 megapixel camera, 4.8 inch PureMotion HD display, rich recording, a polycarbonate case and mirror bezel. It also has Gorilla Glass protection and a quad core Snapdragon S4 Pro processor inside, as well as a 3,400 mAh battery. Every component adds to the bulk and brings the total waistline to 14 mm in thickness. Judging from the interface here and one of Bob’s older concepts, Nokia Nexus Spark runs Android 5.0 Key Lime Pie and looks great doing it.

We’ve got a facade that still keeps some minor Lumia 800/N9 elements, while at the upper side, the device looks like some Galaxy Note II mockups from the past months. The back is totally flat, metallic and glossy, just like a futuristic cameraphone of sorts. So, is this union between Nokia and Google good enough for you? I like everything about it, except for the fact you have to make the device so bulky for that huge battery and camera…