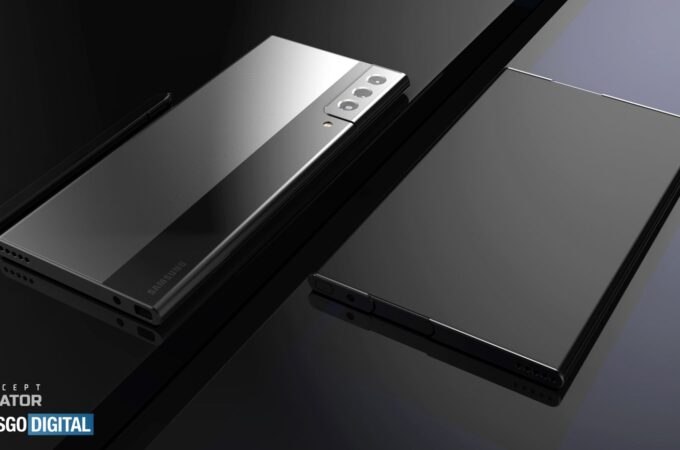 For the past week or so, we’ve seen a piece of news every day saying that the Samsung Galaxy Note series is dead, dying or already canned. Lately we’ve heard it may last one more year, but in 2022 it’s totally gone. Well, the Galaxy Z Fold will probably replace it, or maybe the S Pen gets Galaxy S compatibility. What’s certain is that we have a new concept to show you, a rollable smartphone inspired by the Oppo one recently unveiled.

The creation of Concept Creator and Letsgodigital, this Samsung Galaxy Note Rollable Smartphone with S Pen is a pull out phone with a rollable display. Considering the hype around Oppo X 2021, the format is something to get excited about. Interestingly, a retractable Samsung Galaxy phone was already unveiled for a limited crowd at CES 2020, so Samsung is no stranger to the format. The company has been pretty quiet about it, though. LG also had some patents out, with the same format explored. LG actually has a lot of experience with it, concocting a rollable TV or two.

The easiest way to explain a rollable phone would be just like a pull out couch. The expandable screen slides on rails and the flexible panel gets expanded from something like 6.4 inches up to 7.4 or even 8 inches. Back to the Samsung concept phone, the back camera clearly adopts the Galaxy S21 design, according to the latest leaks. Those have shown a back camera that seems to wrap around the corner of the device. We also get to see the S Pen, which gets a special slot on the left side of the device.

The handset expands by sliding from left to right, with the large appeal of not having to to crease the panel in the process. When you’re gone with the tablet mode you can contract the phone back to its small diagonal. There are two vital mechanisms for a pull out phone: a set of rails to slide onto and a skeleton, an extra chassis part to keep the panel rigid. Concept Creator even has a name for this design: Samsung Galaxy Z Roll. We expect it to be very pricey IF it comes in 2021 pricier than the Galaxy Z Fold 3 even.