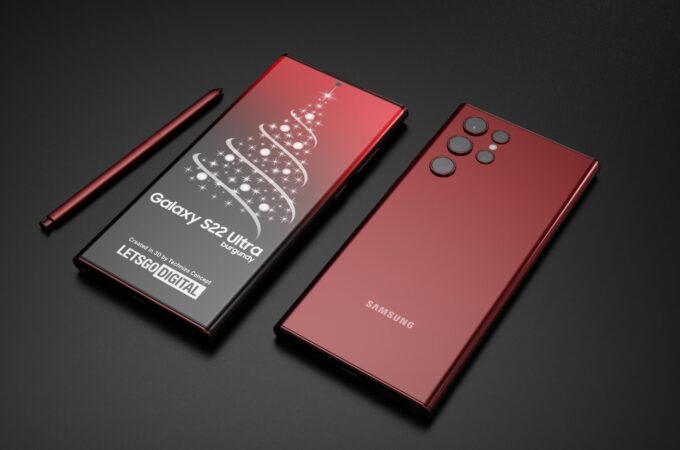 Samsung Galaxy S22 Ultra should debut in February 2022, according to the latest leaks and in this time we have celebratory renders of the device, courtesy of Letsgodigital. The future flagship appears in Burgundy Red this time, a hue that actually suits is quite well.

A for a while now the device was presumed to come in 4 colors: black, white, green and red. Recently leaked pics have shown a pink/purple color version, but there could be even more in the making. This actually sounds quite fine, following an S20 Ultra and S21 Ultra with limited color choices. Letsgodigital already published shots of a red S22 Ultra and now they’re back with a Burgundy version on Christmas.

These product renders were created by talented graphic designer Parvez Khan, also known as Technizo Concept. The handset shown here is a matte version, with the 5 back side lenses sprouting straight from the back side. As you probably know already, this may end up being called the Samsung Galaxy S22 Note, or something like it, sporting a boxier design and a slot of the S-Pen. The top and bottom, plus the sides may end up angular.

Also it’s nice to see Samsung dropping the big camera module, but I wonder how they will integrate the periscope telephoto camera. The source also mentions that this new camera module design is shaped like a water drop. It should include a new generation of 108 MP sensor, a 12 MP ultrawide shooter and two 10 MP telephoto cameras with 10X optical zoom and 3X optical zoom too.

About Kelvin
Passionate about design, especially smartphones, gadgets and tablets. Blogging on this site since 2008 and discovering prototypes and trends before bigshot companies sometimes
Tips and Tricks to Win and Survive in PUBG Mobile   Rainbow Six Siege: 5 Tips For Playing As Lesion