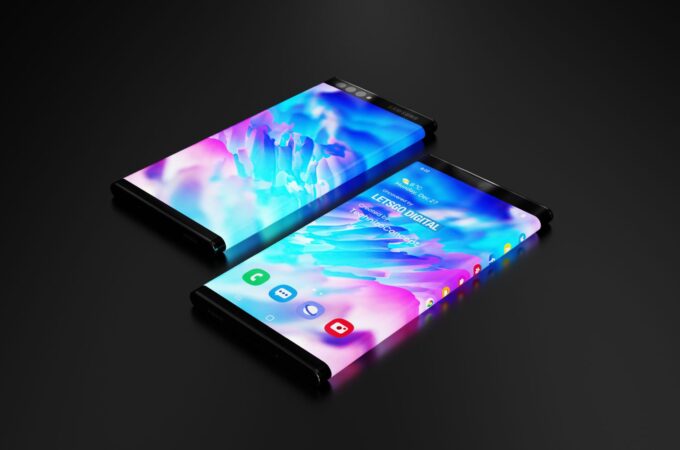 The idea of a wraparound screen has been floated before, especially back in the day, when Jony Ive and Steve Jobs were hard at work for a “bar of a soap iPhone”. It would be all glass, like a bar of soap, sans ports, buttons or distractions. Then things got a bit calmer and people started dreaming of wraparound screens, which is how the concept device below was born.

Technizo Concept envisioned for Letsgodigital a concept called “Samsung Galaxy S30 Ultra 6G”, hitting all the right keywords and SEO magic. In fact it’s a showcasing of the way a wraparound screen would work on a 2023 phone. It’s a bit odd to see this, when more and more companies are drifting towards flat screens, flat edges, flat everything. Except for Samsung maybe, who made a really curved side Galaxy S22 Ultra.

Back in July 2021 Samsung Electronics filed a patent with the USPTO (United States Patent and Trademark Office), for a “Method and apparatus for operating functions of electronic devices having a flexible display”. It was a 46 page document, released to the public on November 18th 2021 and it was included in the WIPO (World Intellectual Property Office) database for worldwide protection of patented technology.

The documents are focused on the flexible screen, but this time Parvez Khan, aka Technizo Concept wanted to turn the patent into a 3D render and also a video below. The wraparound screen can be operated via touch, but also via pen input. We see a large flexible display here, one that covers the front, the sides and the back of the phone. We also have a pretty wide frame edge, visible at the top, which can host the sensors and cameras.

There’s a Power button at the top, since there’s no place on the sides, where the screen keeps flowing. Volume buttons are canned, in favour of virtual keys. Status symbols, like the time, battery indicator and network strength can still be shown. There’s another display on the back side, which helps with taking selfies by using the main camera. This device would be very slippery and accidental touches would happen all the time, even though we’d have touch protection baked in.

Xiaomi also had a wraparound screen Xiaomi Mi Mix Alpha back in the day, priced at 2500 euros, but kept it in prototype form only. I feel there’s no real benefit in turning this into a commercial product… since yields would be low.

About Kelvin
Passionate about design, especially smartphones, gadgets and tablets. Blogging on this site since 2008 and discovering prototypes and trends before bigshot companies sometimes
How foldable phones could replace tablets   How to watch your favorite Netflix shows on your Phone while Travelling