Victor Greavu sent us a concept of the Galaxy Note 3 and the Galaxy S4 before it debuted and now he’s back with what he calls the Samsung Galaxy S5. This may be the first render for this handset, but I have to admit it’s not that inspired. It’s basically just a frame… 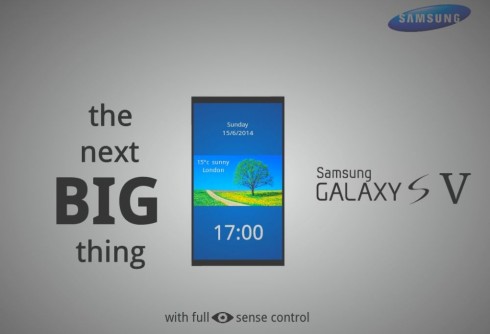 The poster is well done, as usual ironic when it comes to big things and Apple and the handset promises full Eye control. Before the Galaxy S4 was launched we were promised Eye scrolling and other features of this kind. We only got Smart Pause and Smart Scroll via tilt… so the eye thing is still on the table. It may come later through an update, so keep hoping. As far as the Samsung Galaxy S5 concept is concerned, for one thing it ditches the Home button and any type of serious bezel.

If you ask me, the Galaxy S5 design will see a departure from the current styling of the S3 and S4 and maybe even use some of those cool concepts that Samsung has shown at CES over the past years: flexible displays, curved screens, solar panels and all that. And maybe, just maybe… metal not plastic this time!