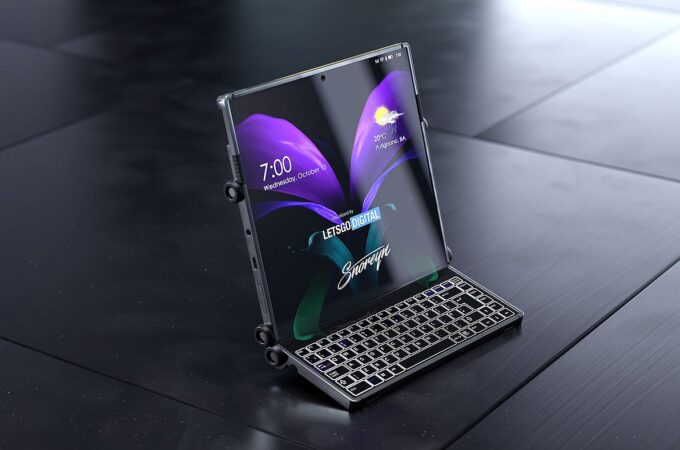 We’ve seen a few speculations and leaks regarding the Samsung Galaxy Z Fold 3 lately, saying that we might get a stylus with it or the inaugural under the display selfie camera. Someone even suggested we may get a third screen on the hinge, weird as that may sound. Now we get to see another proposal, another approach to the next gen foldable, courtesy of Letsgodigital and designer Giuseppe Spinelli, aka Snoreyn.

The newcomer is dubbed Samsung Galaxy Z Dual Fold and it feels closer to a tablet or a laptop even. The sources goes back to the often leak idea that we’re about to see a retractable and rollable phone at some point. Said “Samsung Galaxy Roll” should compete with the retractable/rollable phone from LG that’s rumored to come in 2021. These renders aren’t created out of thin air, but rather based on already existing patents. Samsung Display applied for a design patent that was published by KIPO (Korean Intellectual Property Office) on October 6th 2020.

The application dates from September 2018, back when foldables were still in their infancy. It shows a Samsung smartphone with an outwardly folding display. You can turn the left and right side of the screen to the back and when folded you get a pretty short, wide device to play with. As soon as you unfold the device, an extra wide display is created and the surface increases by 85%. 3D graphic designer Giuseppe Spinelli created a series of product renders to illustrate this.

There’s a kickstand here, triggered via parts of the hinge’s rotating mechanism and it appears that this device can fold twice. The idea of a dual fold machine has been floated before, but never applied. Xiaomi was the first one with a render or concept of this sort. The hinge here does protrude quite a bit, making the device less sexy. The appeal of the dual hinge is that you can create a device with an even larger diagonal than before. You can use a sort of tent mode, tablet mode, laptop and smartphone mode, creating a multifunctional device.

My problem with a a dual folding Samsung Galaxy Z Dual Fold is that twice the hinges means twice the risk of malfunctions or damage, not to mention twice as many creases on the screen and areas to overstress.

About Kelvin
Passionate about design, especially smartphones, gadgets and tablets. Blogging on this site since 2008 and discovering prototypes and trends before bigshot companies sometimes
Vivo Shows Detachable Pop Up Camera IFEA, Already has an Award For It   iPhone 11 Mini is Basically a Reborn Palm Phone