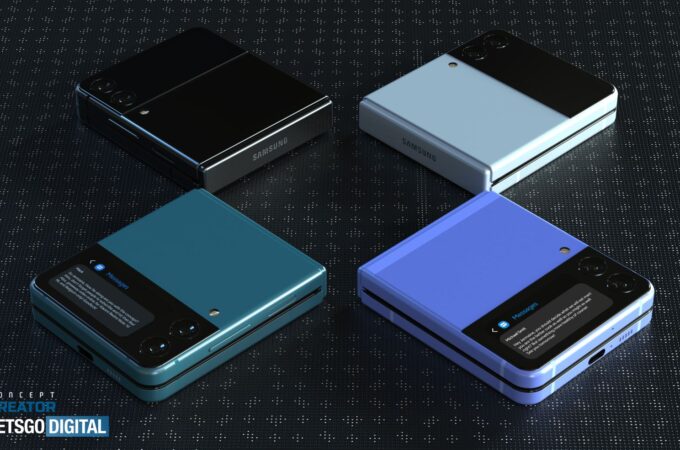 Even though we’ve covered the Samsung Galaxy Z Flip 3 leaks extensively, it appears we may have missed at least one major set of renders. They come from Concept Creator (Jermaine Smith), a Dutch designer with quite the portofolio of renders and we saw it first on Letsgodigital. Let’s check it out.

Compared to the previous renders and leaks, this one feels and looks like a foldable clamshell iPhone would. It’s got flat edges and a segmentation and aspect that iPhone users would find familiar. There’s a two tone design here clearly inspired by the Google Pixel, but we’ve also seen the S21 tackle that approach. Z Flip 3 serves multiple functions with its two tone design: the 1.83 inch cover display is integrated in the glossy black part. By the way that’s quite the hump from the 1.1 inch of the original Z Flip.

Many hoped for an even larger screen, like those seen on the Moto RAZR. The back side camera lenses are placed in a vertical format, leaving more room for the larger cover screen. Inside we find a 6.7 inch flexible screen, with Full HD+ resolution and a 120 Hz refresh rate, which is another upgrade. This clamshell keeps the punch hole camera, so the under display camera is not there yet. The under display camera may be inaugurated by the Galaxy Z Fold 3, hopefully in a better way than Oppo and ZTE did.

The device should have a more solid frame, as Samsung has patented names like Armor Frame, Armor Skin, armor Layer and Pro-Shield. Gorilla Glass Victus will be included here, at the front and back. An IP rating may also come this time around. We definitely need more details about the hinge, but that’s all we got right now.

About Kelvin
Passionate about design, especially smartphones, gadgets and tablets. Blogging on this site since 2008 and discovering prototypes and trends before bigshot companies sometimes
Best Free Software for Students 2021   Samsung Galaxy Z Fold Tab is a Dual Folding Device With Double Hinge (Renders)