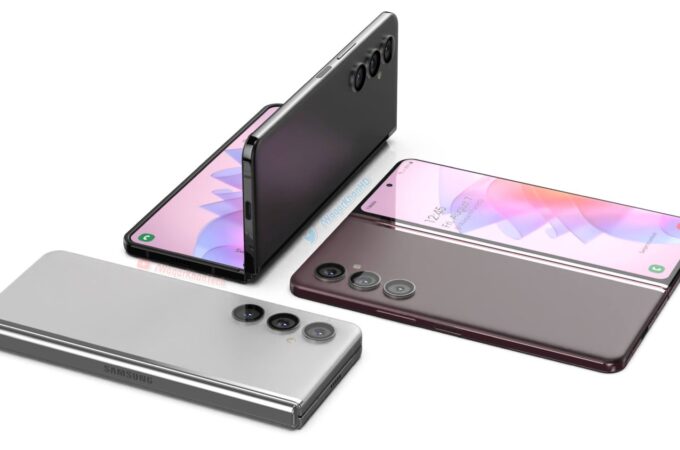 Samsung Galaxy Z Fold 3 was quite the upgrade from the Z Fold 2, having stylus support, an under display camera, IP certification and 120 Hz refresh on both screens. It also brought Armor Aluminum metal for the frame. We’re wondering what else Samsung could bring to the Galaxy Z Fold 4. Designer Waqar Khan attempts to deliver an answer with a concept.

If I were to judge things by the current trends, seeing how the OPPO Find N was smaller and comfier, perhaps Samsung should also make its foldable smaller. It would also be nice to have an S-Pen slot like the S22 Ultra has. Anyway, the designer is playing it safe with a format similar to the predecessors. We do get an S-Pen slot, but the bezels haven’t changed much in size. The selfie camera remains under the screen and the back camera borrows from the S22 Ultra meaning that the lenses sprout from the back side, no extra module.

The lenses seem to be much larger than on the Z Fold 2 and 3, by the way, so I’m expecting some upgrades. Zoom and Night Mode definitely need upgrades and also night time filming, which felt buggy on the Z Fold 2 and Z Fold 3. New color choices, an even sturdier frame and a larger battery would also be nice to have. An enhanced Flex Mode is expected, new One UI features and maybe a revamp of the Note app tailored for such a large diagonal.

Waqar Khan did a fine job with the Galaxy Z Fold 4, but Samsung really needs to step it up an deliver true innovation.

About Kelvin
Passionate about design, especially smartphones, gadgets and tablets. Blogging on this site since 2008 and discovering prototypes and trends before bigshot companies sometimes
OnePlus 10/ OnePlus 10R leaked in live image, with completely different camera   How Can a VPN Help You to Protect Your Apple Devices?