Jsus is the same mystery designer who sent us what looked like a real Xperia Play 2 and now he’s up to new tricks. This time he created a new and futuristic Sony Xperia concept, one that features a transparent Bravia screen and is only dubbed Xperia 2013 for now. I can imagine that this model is somehow related to the Xperia Arc, seeing how it seems to be curved a bit. 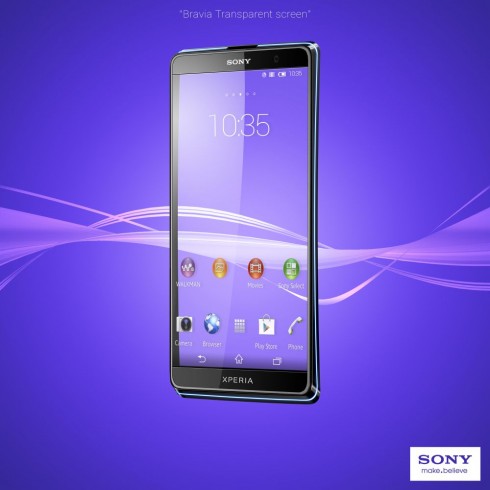 The idea of a transparent smartphone hasn’t been exploited enough and Sony did have an attempt at making such a phone, through the Sony Ericsson Pureness. That phone was the world’s first handset with a transparent screen actually, but it didn’t develop the idea any further. In the case of the beautiful Xperia 2013 I can see there’s a blue line around the edges of the phone and it would be cool if that line would light up in the colour blue, as shown here.

The transparency of the display can trigger a myriad of features, most of them based on augmented reality and the camera app will greatly evolve. You will have to rethink focusing, zooming and the entire way you interact with your surroundings. It would also be cool if the user could set the degree of transparency of the screen or only leave areas of the display as a see through space, sort of like a window with parts of fog and pars that are cleared. Now THAT would be cool! How about you? What would you want from an Xperia 2013 phone with transparent screen? A quad core Tegra 4 CPU wouldn’t hurt…