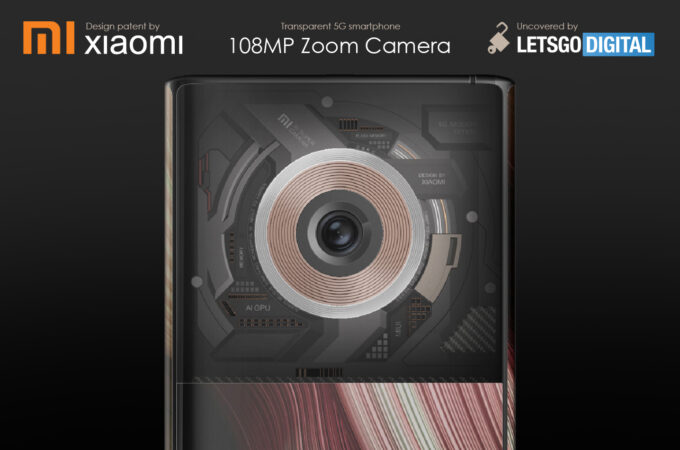 Aside from always having a foldable in the making, Xiaomi has several other cool projects. Among them we find the Xiaomi 5G Smartphone with 108 megapixel Ai Super Zoom Camera. It’s a transparent phone, which has been turned into renders by Letsgodigital below.

Xiaomi was the first company to launch a smartphone with a 108 megapixel camera, using the Samsung ISOCELL Bright HMX sensor. Now we’re hearing about a phone with a 120X zoom, which some people claim could end up as the Xiaomi Mi Mix 4. The new patent we’re discussing now talks about a redeveloped camera system. It involves a single Super Camera with 108 megapixel sensor and a zoom lens, also plenty of AI. There’s also a patent for a completely transparent phone, which is beautifully rendered here.

This is a futuristic full screen smartphone with a curved screen, that also seems to continue at the back side. There are no physical buttons here and at the top there’s an On/Off button and a microphone. The bottom offers speaker for a dual speaker and USB-C connector. By placing another screen at the back, below the camera, you can use the main shooter to take selfies. There’s no extra camera visible at the back or front. Nowadays most companies are chasing quad or penta camera setups, so it’s odd to see a phone with a single camera.

What about Macro? Ultrawide? Telephoto? I know that telephoto cameras can take portrait shots and ultrawide ones can take Macro shots, but having all of them done by a single sensor? Impossible. Well, unless there’s some sort of interchangeable lens… There was also a recent Xiaomi Mi 11 leak but we’ll talk about that later. I think that a single camera phone is unlikely for Xiaomi, but a second screen phone sounds legit.