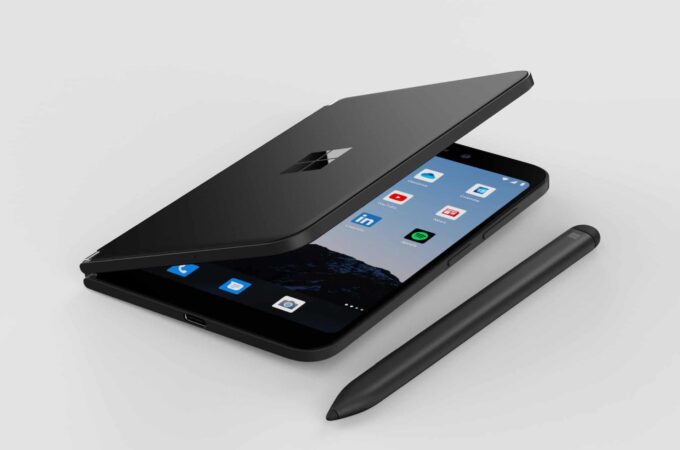 Jonas Daehnert, one of creators of superb looking Nokia concept phones over the years is back, but this time with a Microsoft device. It’s the highly publicized Microsoft Surface Duo 2, a dual display machine that follows upon the controversial Surface Duo from 2019.

There’s a lot to correct, since the first model was a bit of a flop. It had no main camera, no 5G, a pretty old CPU and felt clunky and rather massive. Plus… that price! Now designer Jonas Daehnert is on the case, having created a concept of the device, that focuses on the public leaks we’ve seen lately. It gets a triple back camera with a discrete black module and sans a periscope shooter. The problem with the camera module i that it impedes the device in being flush open with the two sides overlapped.

These screens of the Microsoft Surface Duo 2 come with rounded corners and reduced bezels, even though they’re still big by 2021 standards. The dedicated fingerprint sensor has disappeared and it has been integrated into the Power button now. The USB-C connector has been repositioned and just like the other smartphones, it’s placed in the middle of the underside of the device, the right one.

The second gen is also available in black, not just white, for a more sober elegance. Surface Duo 2 also brings NFC, 5G and an up to date CPU, probably the Snapdragon 888. We also get to see a Surface Pen in the renders and hopefully the screen has been adapted to it. Each side of the Surface Duo is only 5 mm thick, which may be too thin for the phone’s own good.

I’m more curious about the way the software has changed and the way we can interact with the two screens now. One would also wonder why we’re not getting Windows 11 here instead of Android with a Microsoft launcher. I guess we’ll learn more during the typical October Microsoft event. Would be nice to also see a 3D Concept video of the device as well.

About Kelvin
Passionate about design, especially smartphones, gadgets and tablets. Blogging on this site since 2008 and discovering prototypes and trends before bigshot companies sometimes
9 Apps That Will Make Your Time at College a Piece of Cake   iPhone 13 Gets a New Trailer, Side Screens, Under Display Camera